Leicester City have been big news around the football world for some years now.

The club’s unlikely Premier League success launched their name and now when teams from South America to Asia are on the verge of achieving something against all the odds, it can be sure that the Foxes will be referenced.

One man at the centre of that was Vichai Srivaddhanaprabha.

The club’s owner was not only at the forefront of the success but also made sure the majority of the major players were kept for as long as possible, with several still there.

Losing his life so tragically in the helicopter crash, Srivaddhanaprabha has been celebrated this weekend by the club’s supporters, and there are plans for a statue outside the stadium.

Claude Puel has been speaking to L’Equipe, and told the French newspaper: “Vichai was a real member of the family in the eyes of all the employees of the club. He was someone who always smiled and felt the need to please his entourage, to be in a positive atmosphere.

“He often invited me to London and I borrowed this helicopter several times with him (long silence)… We had very cordial relations. We talked a lot, but only 10% about football. It is more with his son “Top” (Aiyawatt) that I exchanged on the club, for example concerning the transfer window. Vichai also often invited me to attend horse races. I’m not a big fan, but it was always beautiful to see and a good time to live with him. All this marked me a lot.” 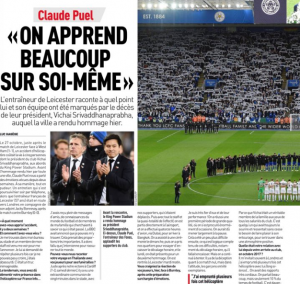 L’Equipe then asked if the relationship was very different from what Puel had experienced at other clubs: “It’s something else indeed, even if I had only been around for a year. It was felt every moment that he had changed the lives of people in this city, far beyond football.

“He wanted deeply to do good around him. That’s why people are so affected. He certainly invested a lot of money, but he also bet on the human. That’s why he was so special and so much appreciated by everyone.”