West Ham had to part with a club record fee to sign Issa Diop from Toulouse in the summer, but there can be little doubt around the signing.

Despite being just 21 years of age and making the jump to the Premier League from Ligue 1, Diop has already appeared thirteen times for the Hammers and has been one of the club’s better players on most of those occasions.

His value is now higher but West Ham will have no plans about selling the youngster in the near future. Even if recent links to PSG may not have had an awful lot behind them, it was a credit to the footballer that it made some sense.

Diop has been speaking to L’Equipe and during his chat with the French newspaper it was apparent that he’s not content with his current success and plans to keep improving and pushing himself.

L’Equipe put it to Diop that people at West Ham and in England generally have been impressed by his start to the season, but the youngster is playing it cool: “I am surprised sometimes by the comments of people who find that I make good matches. I think I’m starting a normal season.” 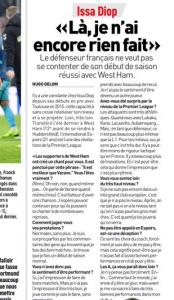 With him not being content with his current level, L’Equipe asked Diop what he would consider as good performances: “Do it without any mistakes. Even if I make one in a match, it’s one too many. I have always been very demanding of myself. This is the only way to perform. My personality and my education are like that. I know I have a lot of work to do. So, I have not done anything yet.”