Home Europe After Liverpool talks already held, Klopp could get defender for free… or...
SHARE

Towards the end of May, just before Liverpool were called out for illegally approaching Virgil Van Dijk, there was talk of the club being interested in Stefan De Vrij.

The Lazio defender had been linked with a move to the Premir League throughout the 2016-17 season, with Chelsea and Manchester United said to be after him, yet it seems Liverpool ended up being the closest.

According to Il Messaggero, discussions about the centre-back took place between Jürgen Klopp’s side and the Serie A outfit, with Keita Baldé also thrown into the mix.

In the end, the only player to move between the two clubs was Lucas Leiva, who has already become something of a fan favourite in Rome. 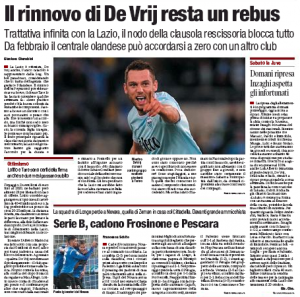 With Virgil Van Dijk seemingly going nowhere until at least next summer, and Southampton unlikely to let him go for cheap, the opportunity to sign De Vrij could present itself again, and this time, it could be really easy.

Yet to renew his contract with Lazio, the Dutch international’s agency are apparently stalling as their demands of a €20-25m release clause being inserted in the deal aren’t being met, with Igli Tare and Claudio Lotito wanting one in the €40-45m region.

Furthermore, there’s also the possibility of Liverpool being able to get De Vrij on a free for next season, as his current deal with the Serie A club runs out at the end of the season.

We’ll have to wait and see what happens, but our gut feeling remains that Lazio will agree to SEG’s demands of a lower release clause for fear of losing their star defender on a free.