Home Europe Move to Manchester City can be ‘clear possibility’ for player – After...
SHARE

Isco is no longer a regular at Real Madrid and has made only 18 league starts since the start of last season.

Reports coming out of Spain last year stated Manchester City manager Pep Guardiola has long been an admirer of the 28-year-old.

The Citizens get a mention in AS’ report on the Spain international and they take a look at his situation.

Isco’s intention behind changing clubs is ‘exclusively’ down to the ‘desire to revitalise’ his career and also improve his chances of making it to the national team squad for Euro 2020.

It’s claimed the former Malaga star had asked to leave the club in the summer, but the La Liga winners never received any official offers.

When talking about potential suitors, the newspaper states City and Juventus showed ‘firm interest in the past’, and these two clubs can be ‘clear possibilities’.

AS states the player has ‘no preferences’ as far as the league goes. The 28-year-old is only looking for club where he can play regularly and preferably a club which plays in the Champions League. 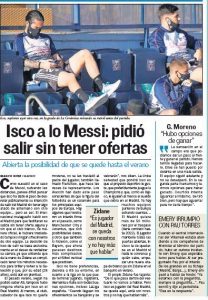 Real Madrid will need in excess of €50m for Isco, which sounds on the high side.

Isco keeps ‘all the doors open’, including staying at the Spanish capital club, if ‘nothing convinces him’.

AS are only suggesting the likes of City and Juventus can be a ‘clear possibility’ for Isco because of the ‘firm interest’ they showed in the past.