According to Aksam, Galatasaray manager Fatih Terim has a clear target in mind for the No.9 position and that player is Chelsea’s Michy Batshuayi.

The Turkish giants are expected to part ways with 31 goal forward Mbaye Diagne this summer and the Senegal international has been linked with a move to Premier League. Southampton, Brighton & Hove Albion and Crystal Palace are all said to be interested.

Subsequently, Gala are in the market for a first choice striker this summer and Aksam say Terim wants to sign the Chelsea man on a temporary basis.

It’s reported by the Turkish newspaper that new Chelsea manager Frank Lampard doesn’t see Batshuayi in his plans for next season and another loan move looks likely for the Belgian. Last season the player was first with Valencia, before he moved to Crystal Palace. 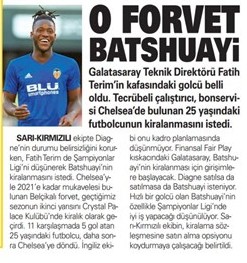 Whilst at Selhurst Park Batshuayi showed some form, helping the Eagles avoid the drop to the Championship.

Galatasaray are reportedly hopeful of signing him because of the Champions League factor, but the player’s decision will be key in any deal being done.