After seeing the saga being ignored for a couple of days, we’re back reading conflicting slants about Bruno Fernandes coming from the Portuguese media today.

Newspapers A Bola, Correio da Manhã, Jornal de Notícias and Record all believe Manchester United are about to bid for the midfielder, but not all of them think they are close to getting him.

Starting with A Bola, let’s remind you that a couple of weeks ago, they said the Red Devils would first sign a defender and then go for two midfielders.

They stick to their claims today, saying that after signing Harry Maguire, Manchester United will be going for Bruno Fernandes, regardless of Paul Pogba’s future at the club.

It’s reported agent Miguel Pinho will again be flying to England this week, where he has an office, to confirm the amount offered by the Old Trafford side. And if they really bid €55m, as the English press has been saying, it’s unlikely Sporting will accept. 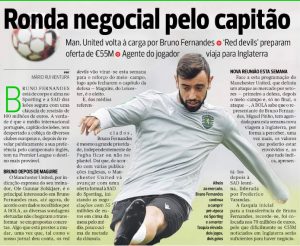 But other outlets are more positive about the possibility of a deal. Correio da Manhã says Manchester United have set the price they want to pay for Fernandes, and that’s €55m, and it’s unlikely this bid will be raised. It’s said the offer should get to Alvalade in the next few days.

Although Sporting president Frederico Varandas wants to make €70m with this sale, he will hardly get that much for Fernandes.

And since he’s said he wants to make the midfielder Sporting’s biggest sale ever, the €55m will be enough to beat João Mário’s transfer to Inter Milan, which gave the Lions €45m.

This optimism about a bid being accepted comes from Jornal de Notícias as well. They say Sporting are no longer interested in listening to approaches, but in case an official bid arrives, it’s possible they will make a discount.

They affirm that if Manchester United raise their initial offer from €40m to €60m upfront and include some performance bonuses, then Sporting could accept it. The ideal scenario would be to get to €80m in total, but something over €70m would be enough.

Meanwhile, Record only warns that the Premier League transfer window closes before the others in Europe, and it means the Red Devils must hurry up to sign him.