It’s been a while since Cengiz Under had been linked with anyone in the Premier League, and by ‘a while’ we mean a week.

That, in the Italian media, is a very long time, especially when you consider how easy it is for them to just throw names around.

What’s even more impressive is that, this time, it’s Chelsea who are the linked club, because it’s not usually them in the spotlight.

Gazzetta dello Sport are the ones claiming this, stating both Arsenal and the Blues have a ‘strong interest’ in the 21-year-old, who, should they make a move, wouldn’t come cheap. 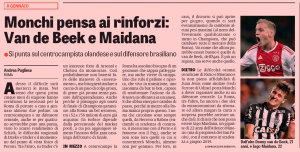 In the past, it’s been explained that Roma are trying to get the youngster to sign a new contract, with a release clause of around €50m+ being touted.

Even if the renewal was yet to be signed, you’d expect the Serie A club to ask for a similar amount from Maurizio Sarri & co.

We doubt anything will happen in January, as Roma won’t want to sell, but next summer could be the ideal time for both Monchi to cash in on his starlet and Chelsea to move on from the likes of Willian and Pedro by bringing in some fresh blood.