When we saw a Marca headline today saying “You’ll Never Walk Alone” as part of the build up to tonight’s Rangers versus Villarreal match, we assumed they’d made a mistake and taken a song from the wrong Glasgow club.

But, no, the Spanish newspaper are highlighting a special friendship between Celtic and Villarreal, and explain fans of Brendan Rodgers’ side will ‘help’ against Steven Gerrard’s men tonight.

The help is simply by the way of support around the city, unless a few try to get into Ibrox, and whilst Celtic fans will always want Rangers’ opponents to triumph, this time it’s even more so.

It all dates back to a 2004 UEFA Cup quarter final between the the clubs. ‘Such a good aftertaste’ was left between both Celtic and Villarreal fans that ‘powerful links were created’.

Digging a little deeper reveals a really good news story. Something called Celtic Submarí was formed, and the group now has more than 600 members in Spain. The motto is ’90 minutes of rivalry and a lifetime of friendship’.

They say on their website: ‘We promote varied activities such as dance, tasting courses (we think they mean wine), English courses, cultural and sports trips, walks, athletics 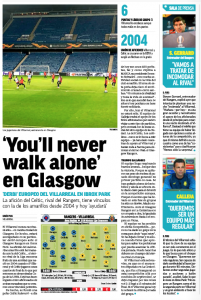 group, football team… we have some parties that we celebrate annually: the Christmas party, the traditional Llonganissada de Santa Caterina, the end of season dinner, and the Maquinetes de Raure party at the patron saint festivities in September… we meet every Friday of the year (except for the summer) to be able to speak and to make an aperitif.’

Back to the Rangers match, and Marca say Villarreal and their supporters know they’re not alone in Glasgow. They have the special support of many in the city.