It was also explained the Blues need a miracle to stop the 28-year-old from joining the La Liga giants, following the return of Zinedine Zidane to Santiago Bernabeu.

Tuesday’s edition of AS claims the former Lille man’s childhood dream is to join the Spanish capital club and this is likely to become reality in the summer.

His entourage has already informed the newspaper the player has decided on his future, which is to wear the white shirt of Real Madrid. The return of the French manager is good news for Hazard and his camp, but he would have still wanted to join Los Blancos even if there was another manager at the club.

Zidane is in love with Hazard’s football and in the past had recommended Real Madrid to sign him on several occasions.

People close to Hazard have shown a certain ‘tranquility’ to AS while providing update on his ‘current situation’. 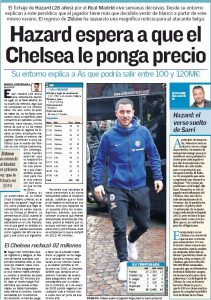 The transfer is not just in the hands of the 13-time European champions. Real Madrid will have to agree a fee with the Premier League side for the player whose contract expires in 2020, and they are unaware of the price Chelsea director Marina Granovskaia will demand.

The rough estimate is anywhere from €100m to €120m and Hazard remains hopeful the west London club could reduce the asking fee.