Home Premier League Chelsea Chelsea official was in Portugal on Monday – Back transfer window-shopping after...
SHARE

Chelsea had an official on a pretty unusual mission on Monday, according to reports from the Portuguese press.

Newspaper A Bola says club emissaries watched the match between Rio Ave and Gil Vicente, which finished with a 1-0 win for the home side.

Rio Ave’s goal was scored by Taremi from the penalty spot, but it was Diego Lopes who was the man of the match and may have caught the scouts’ eyes.

It’s interesting because Chelsea haven’t had regular scouts in Portugal lately, probably due to their transfer ban. Now as they’re back in the market, it didn’t take long until they started looking at potential targets. 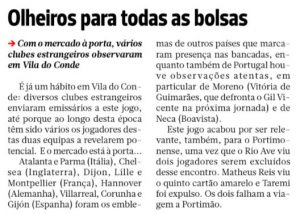 English clubs, especially the bigger ones, don’t often watch games in Portugal which don’t have Benfica, Sporting, Porto or Braga involved, so Chelsea probably had a specific target for this match.

The Blues could even be checking on Lucas Piazon, who’s having a loan spell at Rio Ave, but he hasn’t been making it to the match-day squad lately and they’d surely know about that.

Looking for youngsters to buy and then loan out is, obviously, a distinct possibility.