For the past couple of months, when Sporting’s Bruno Fernandes has been in great form, many stories have claimed that Chelsea are one of the sides who wish to sign him.

That’s why we’ve found it weird when covering an article on Tuesday which only mentioned Milan and Liverpool as the clubs in the race.

But things are back to normal today, as the Blues are back being named, this time in a report from newspaper O Jogo.

The outlet brings a story saying Sporting want to give the player a new contract, so he can get a pay rise for the great season he’s been having. 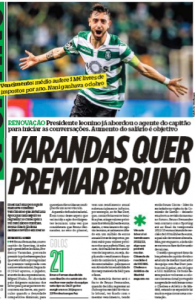 So when speaking of the clubs who want him, O Jogo names Atletico Madrid and Chelsea as the main threats to take the player out of Sporting.

That’s all they’ve got to say for now, with no further details of negotiations of expectations of a bid.

Newspaper Record brings a very similar story about a new contract, but doesn’t name any clubs who could get the player. All they say is he’s only leaving for a side who can fight for a Champions League title.