Chelsea midfielder N’Golo Kanté has been ordered to appear in court to give testimony in the ongoing case against his former agent Nouari Khiari.

That’s according to L’Equipe, who say the Chelsea star has been served a summons by bailiff as the dispute between the pair rumbles on.

The Frenchman has been in dispute with his former agent for several months, with the latter alleging he is owed money for various issues that was in the contract between the pair.

However, having failed to reach conciliation with the player on several occasions, Khiari has now filed a summons for Kanté to appear in court, with these delivered to the player’s home and Chelsea’s headquarters on 11th March.

L’Equipe has learned that Khiari alleges Kanté owes him no less than €3.8m, most of which are damages as a result of the contract the pair signed in 2016.

The image agents claims he is owed ‘remuneration’ under the terms of that contract as well as fees he should have received when the Chelsea man signed a deal with sportswear giants Adidas.

He claims that he ‘fulfilled his mission’ by presenting Kanté with several draft contracts for various brands and companies, although Kanté argues that these did not correspond to his image.

Kanté tried to get rid of his agent out of court before then taking the legal route last year, accusing Khiari of “fraud, attempted fraud, breach of trust and illegal exercise of the profession of sports agent.” 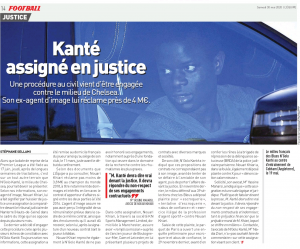 L’Equipe explains that Paris public prosecutor’s office opened a preliminary investigation into this complaint for fraud and breach of trust on 29th November and then opened an investigation into the case on the same day before handing it over to the Paris Judicial Police.

Khiari also filed a complaint for “slanderous denunciation” hence the current legal battle between the pair.

Now the Chelsea star will have to appear in court to tell his side of the story, with Khiari’s representative telling the newspaper; “this subpoena is a logical and legal consequence. Rather than fabricate in front of the press, Mr Kanté will have to tell the truth in court”.

Kanté’s lawyer, Ms Nadia Zrari, did not comment when contacted.