Chelsea showed firm interest in Jules Koundé in 2021 and even made an offer, which was deemed insufficient by Sevilla.

Two days ago, L’Equipe explained the centre-back is ‘very tempted’ to join the Blues this summer.

On Wednesday, Sport reported that Chelsea will present a new offer soon to secure the 23-year-old’s services.

ABC Sevilla on Thursday explains Chelsea’s new owners have ‘asked for serenity’ from the France international’s entourage and also to ‘avoid listening to proposals’ from other clubs, especially from those with more financial power. 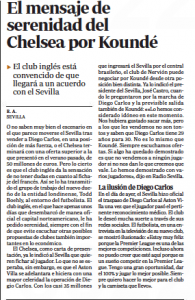 the Spanish club for the centre-back.

Chelsea have already informed Sevilla of their desire to sign the former Bordeaux man.

What was not expected is Aston Villa securing Diego Carlos’ services from Sevilla for €35m plus bonuses.

The Brazilian’s transfer to Villa Park has allowed Julen Lopetegui’s side to negotiate Koundé’s sale from a strong position.

The newspaper doesn’t talk about any figures that Chelsea will offer, or what Sevilla could accept to sell the Frenchman.