The Dutch midfielder has yet to feature under Sam Allardyce, and it wouldn’t be a huge surprise if he leaves Everton before the transfer window closes.

According to AMK, Fenerbache have given up on Badelj and have turned their attention to Klaassen.

It’s also been reported Klaassen has asked for information from his new Everton teammate Cenk Tosun, and has been impressed with what the Turkey international has told him about football in the country. 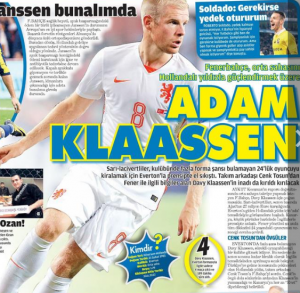 Klaassen has been constantly linked with a move to Fenerbahce and with just 6 days remaining of this transfer window the Turkish giants will need to act quickly to land the Everton outcast.

The Turkish club have penned a new deal with a major sponsor and they will likely use that money if they want to sign Klaassen.