Home Europe Celtic transfer ‘particularly’ being studied, but the fee may be an issue
SHARE

AS Monaco are looking for a forward, and Celtic fans won’t be surprised to hear Moussa Dembele is being mentioned again.

The Celtic Park hero is said to be a potential transfer ‘particularly’ studied by ASM.

Thursday’s edition of L’Equipe looks at the options Monaco are considering, and Ajax’s Kasper Dolberg is one of the players to join the Celtic star. The French newspaper believe Monaco could get Dolberg for €20-30m, which would make one wonder what they’d price Dembele at.

Dolberg was much wanted when he moved to Ajax and he’s done well there so far. Wednesday’s edition of Dutch newspaper De Telegraaf claimed a €50m offer from Monaco had been rejected, and whilst that seemed like Ajax PR, it gave a good idea of where the Dutch club see a value for the player.

If L’Equipe’s claims are correct, Monaco won’t be throwing money around, despite expecting clubs to throw money at them this summer. Simply being a Monaco player has 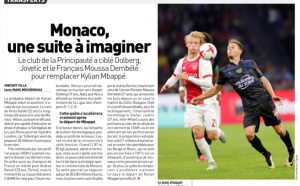 led to a premium, so surely there’s no way Celtic would then sell Dembele for a reasonable or cheap fee.

Brendan Rodgers won’t want to lose any of his key players this close to the end of the transfer window, but Dembele would understandably be tempted by a switch to Monaco.

Celtic could have problems if a serious approach is made, and those problems will be further aggravated if Monaco feel they can sign Dembele on the cheap.