Home Europe “Calling me relentlessly” – Player says Benitez desperate to get him at...
SHARE

Part of a long ‘will he, won’t he’ saga regarding an exit from Newcastle, Achraf Lazaar finally got his move away from St James’ Park, with newly promoted Serie A side Benevento taking him on loan for the season.

Barely featuring last season under Rafa Benitez as the Geordies battled their way to a Championship title to return to the Premier League, it became very clear the Morocco international, who had spent the vast majority of his career in Italy, wasn’t part of the Spaniard’s plans.

Now back in a country he feels comfortable in, the 25-year-old left-back/left-midfielder had a chat with Gazzetta dello Sport about his time at Newcastle, and didn’t exactly have kind words for his former manager. 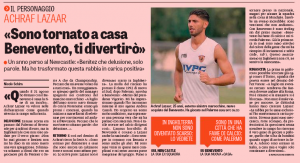 He said: “When I signed with Benevento on August 31st, it was the end of a nightmare. I never played, and Benitez didn’t give an explanation. He just kept telling me that I was more of a player for the Premier League or Serie A than for the Championship.

“It’s a shame, as he wanted me at all costs. In July last year, I was about to sign with Fiorentina, where the contracts were already ready, when he started calling me relentlessly to convince me to go to Newcastle. Too bad his words were just words: what a disappointment.”

Explaining he chose Benevento because he was impressed with the ambition the club’s president showed, Lazaar just wants to get back to playing regularly, and he believes he’s at the right club to do that.