Belgium face Scotland at Glasgow’s Hampden Park later today and the previous three encounters between the two nations have ended in a 2-0 victory in favour of De Rode Duivels.

The last time these two countries faced each other was in 2013 and there is a mention about that match in today’s edition of Gazet van Antwerpen.

Steven Defour and Kevin Mirallas got their names on the score sheet five years ago and the newspaper talks about the Burnley midfielder, who has played his best match for his country.

According to the 30-year-old, the manner in which Belgium played against Scotland was the ‘real beginning’ of their golden generation.

Defour, who announced his retirement from international football before the 2018 World Cup, last featured for the Clarets in January after which he was forced to undergo surgery on his knee. 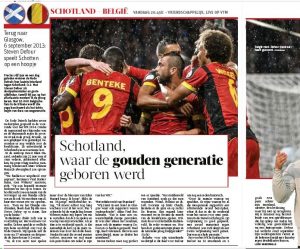 He suffered a further setback in July and is now sidelined with a muscle injury, and the report claims the player could ‘celebrate’ his return to the pitch when Sean Dyche’s side face Burton Albion in the Carabao Cup clash at the end of this month.