The Portuguese media is starting to build up a big coverage ahead of the Europa League clash between Braga and Wolverhampton Wanderers on Thursday.

On Monday, Record already had stories claiming that over six thousand Wolves fans are expected in the north of Portugal.

Braga are on top of Group K with ten points and only need a draw to guarantee their qualification for the next stage. The Premier League side come just behind with nine.

Now it isn’t just in this campaign that Braga have been doing pretty well. They are actually about to break a record by becoming the Portuguese club with the longest unbeaten run in European competition. They only need a draw against Wolves so they can get to 12 matches without a loss, as reported by TVI. 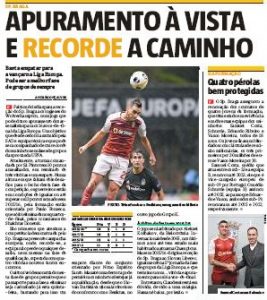 Record shows there’s another record to be broken. That’s because in in previous seasons, Braga could only reach ten points in the group stage. So they only need one point in their next two games so they can have their best campaign in the competition.

That’s why the Portuguese club are pretty excited to play Wolves at home, especially after showing their strength by winning 1-0 at Molineux.

And of course, welcoming Wolves to their spiritual home of Portugal is another reason for the excitement.