Among the usual big names doing big business this summer, Aston Villa was one that will have caught the eye.

Fresh from a play-off final success over Derby County, the Villains went about a complete overhaul in the transfer window, adding 12 players to their squad and spending £133m to do so.

One of those arrivals was Bjorn Engels, the Belgian defender joining in a £7.2m deal from Ligue 1 side Reims as manager Dean Smith looked to bolster his backline for a Premier League campaign.

The former Chelsea defender has vast experience of the Premier League, having been one of the best it’s produced and won it during a trophy-laden career at Stamford Bridge, and Engels admits he was even scared the first time he met his new coach.

“I get a lot of confidence from the trainer,” he told newspaper Het Laatste Nieuws.

“But also from Terry. Incredibly, hey. When I arrived, I was a bit scared. You look up to him: such a legend. You expect him to step onto a training field with an attitude of ‘who are you’, but he is not at all condescending. Completely the opposite even.

“You know me too. I have always looked up to the Premier League and that you are on the training field with someone like that every day and after the practice session, you regularly sit together for individual adjustments. Fantastic, right?

“We studied clips from my previous clubs together I can’t imagine a better mentor If you’re talking about legendary defenders in the Premier League, it’s him and maybe a couple from Man United – Rio Ferdinand – if you can learn from someone like that. The ideal guide in a new competition.

“It’s the details that can make a difference. An example: when I return to the position I don’t have to walk sideways, but with a different run, so that I have a better overview of the game. In the second half, a pass came true Harry Kane immediately came to lean. If I had walked differently, I could have blocked it. Those are the tips I can use to grow as a defender.”

Moving to Villa, and the Premier League specifically, is a dream come true for Engels, who has long wanted to make the switch to England.

The Belgian had the opportunity with Bournemouth in 2016 but his club at the time, Club Brugge, turned the Cherries away despite there being an agreement he could go if a Premier League club came calling.

That hurt the 24-year-old, although he admits his arrival at Villa Park this summer comes at the ideal moment in his career.

“The Premier League is the competition, isn’t it?

“It’s not for nothing that I have wanted to come here for two to three years. That moment was taken away when I was still at Club Brugge.

“In July the opportunity came again. I didn’t want to leave it at that. The coach, Dean Smith, absolutely wanted me. I arrived at an ideal moment. It was time to adjust to the level.

“Everything is spicier, faster and more intense, but with Tyrone Mings, our other defender, I had a quick click.”

Engels made his debut on Saturday, starting at the heart of Aston Villa’s defence in their opening game against Tottenham. 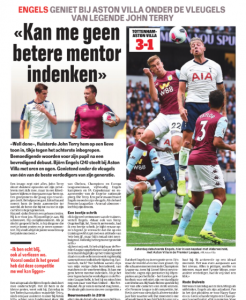 And while that was a disappointing result for Villa, Engels admits that he walked away with nothing but a sense of enjoyment.

“This is enjoyment,” he added.

“For competitions like this, you come here. I am really happy, even though we are losing. Especially because I feel that this competition can suit me. A nice feeling.”