It’s fair to say that Newcastle United’s takeover by Saudi Arabia’s Public Investment Fund has got everyone talking.

The Magpies suddenly becoming the world’s richest club, as far as owners are concerned, is major headline news, particularly when those buying the club are not what you would describe as clean cut.

While the new owners insist they have nothing to do with the Saudi Arabian government and thus no connections to the various crimes they have been accused of, that’s an argument that nobody is buying.

The whole deal is shady as far as most are concerned, with issues around sports washing now right at the forefront once again.

It’s a debate we’ve seen before in English football when Manchester City were bought by Sheikh Mansour, and Italian newspaper Libero cover how Newcastle’s new owners could follow the path laid out by those at the Etihad.

They explain that buying Newcastle was part of Saudi Prince Mohammed Bin Salman’s efforts in ‘relaunching the image’ of his country, which has ‘remained somewhat in the shade’ compared to the ‘notoriety’ earned by those in charge at PSG and Manchester City.

It’s also felt that he wants to ‘regain his pureness’ after the CIA accusations regarding the murder of Jamal Khashoggi, which is obvious, as well as invest for the future before the ‘black gold of oil’ runs out.

Newcastle will help him with that, and while he plans to ‘relaunch the club’ as much as he can, they are not his only interest.

He also has a ‘strong interest’ in Inter Milan and even started contacts with the Zhang family about a sale last year. That interest was rejected, but now times have changed, and they could come to an agreement.

Bin Salman has reportedly put a billion euros on the table, which is ‘tempting’ for Steven Zhang to accept. 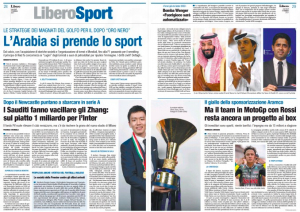 The idea for the Saudis is to not only get themselves a club in Italy but also the stadium and the reclaimed land around it in one fell swoop.

Owning Inter would allow them to further their stronghold in football after buying Newcastle and thus spread their wealth like the owners at Manchester City have done.

They’ve bought various clubs around the world via the City Group, building up a network of clubs and linking them all together via loans, sponsorship and numerous other routes.

It’s also seen them ‘diversify’, and Newcastle’s new owners could do the same in Italy as they could use their various businesses for sponsorship, events and whatever else.

In other words, Newcastle could soon find themselves as part of an ever-extending group of clubs as Manchester City have, as their new Saudi owners extend their influence, so expect plenty of Inter Milan related transfer stories if it happens.