Simon Mignolet was finally allowed to leave Liverpool in the summer window, and returned to Belgium with Club Brugge.

The goalkeeper had last played in the country in 2010, for Sint-Truiden, before leaving for English football and Sunderland.

When Jurgen Klopp arrived at Liverpool he first tried replace Mignolet with Loris Karius, which didn’t exactly go to plan, and then brought in Alisson from AS Roma, which very much did go as hoped for.

With no route to the first team aside from injury to the Brazilian, Mignolet had wanted out for a while, and he’s joined a club which is trying to push forward.

They’ve opened a new training complex, with HLN calls ‘breathtaking’, and held an event on Wednesday to celebrate it. Club chairman Bart Verhaeghe had ‘tears in his eyes’ when launching the facilities, and Mignolet also spoke.

The goalkeeper said: “This is better than Melwood, the training ground of Liverpool, better than that of Sunderland and the training complex of the Red Devils in Tubize. There is really nothing missing here. 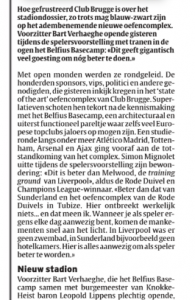 “If you are present somewhere every day as a player, the defects quickly come to light. In Liverpool there was no swimming pool, in Sunderland, for example, no hotel rooms. Everything is there to get better as a player.”

The next step for Club Brugge is pushing on with their long awaited stadium plans.