Of all the bold decisions a young Spanish player can make at the age of 16, swapping Barcelona’s U18s for Dinamo Zagreb is up there.

That’s what Dani Olmo did in 2014 when his contract with Barcelona came to an end, and while the payoff wasn’t immediate, it certainly is now.

At 21 years of age, the attacking midfielder is captaining Spain’s U21s, single handedly dominating the Croatian league and being talked about as one of the more exciting and affordable prospects in Europe.

A number of clubs had a look at him over the summer, including a few Premier League ones, yet no one made an offer Dinamo Zagreb felt was acceptable.

Večernji List on Thursday explain only one club made a concrete bid for Olmo’s services, but the €16m presented by Borussia Dortmund were swiftly dismissed by the Croatian side.

This refusal to sell and hold out for more didn’t go down well with the player’s father, who said the Zagreb club ‘didn’t treat his son like a star’ and was not paid ‘like a star’.

That’s not technically true, as Večernji List explain Dinamo have offered their best player a €1.2m/year five-year contract (a club record wage), where they would be happy to include a €40m release clause to facilitate an exit.

That figure would make him affordable to most big clubs while compensating the Croatian side fairly for all they’ve done for him. On top of that, the newspaper report the club might have even let him sign without the clause. 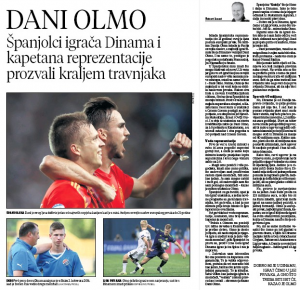 The deal is now ‘sat on Olmo’s desk’, and with Joao Félix going for €125m, a player Večernji List feel ‘can only play in one position in one formation’, why shouldn’t Zagreb ask for more?

Over in Spain, however, where Barcelona are reportedly keeping an eye on their former youth product, the argument is that he only has two years left on his contract.

After this season, that will be down to one, and Zagreb will be forced to sell him for far less than what they were holding out for a month or so ago.

Mundo Deportivo report Barcelona are very keen to bring him back, and, knowing Olmo wants to move to a better league, they’re prepared to wait and simply scout him throughout the season for now.

Sadly, the transfer market is an ugly game at times, one where the powerful and rich often win, leaving clubs like Dinamo without the money they probably deserve.

At this point, all the 1.HLN side can do is hope Olmo repays them for all the work they’ve put into him over the years by signing that contract and accepting the €40m clause.

If not, he’ll probably go for half of that, and it won’t be the dream end Dinamo fans will have wanted, perhaps even leaving a bitter taste in everyone’s mouth.