Barcelona’s crisis has calmed just a little, and the club’s finances are in a slightly better situation then they were a few weeks ago.

Memphis Depay looks to be a better signing than many expected, and after three matches Ronald Koeman’s side are on seven points, sharing that status with five other clubs at the top of La Liga.

Of course, the team isn’t as impressive as it once was, and the journey back to success is going to be a long one for president Joan Laporta.

There are ongoing questions about renewals and salary reductions, and one of the players in question is Sergi Roberto. He sees his contract expire in less than a year, and Mundo Deportivo report a renewal offer was made a couple of weeks ago.

As it stands, the Barcelona player doesn’t see this as acceptable, given the huge salary reduction. The club think the offer is fair, partly due to the financial issues being faced right now.

The offer was for a further two years of contract, and Sergi Roberto isn’t sure if Barcelona are just trying to protect themselves against a free transfer. Therefore, the player has had a personal meeting with Laporta to ask what the real plans are for him. 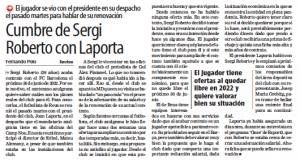 Should there not be a big commitment, then the prospect of an exit is on the cards, and it’s stated the Spaniard already has offers for next summer. His priority is to remain with Barcelona, however, that isn’t under any conditions and an exit is a possibility for him.