Still working hard to bolster their squad ahead of a tough Premier League season, Aston Villa are looking in Italy, according to a couple of claims in the Italian media.

The man in question is Grégoire Defrel, currently contracted to AS Roma, who spent last season on loan at Sampdoria, where he did rather well.

Scoring 12 goals in 39 appearances in all competitions, the 29-year-old returned to the capital with an improved reputation, and a bit of interest has come his way, including that of Aston Villa and Watford.

The Hornets aren’t the main event here, as they have been sporadically linked every transfer window for as long as we can remember, dating back to his time at Sassuolo before he even moved to Roma. 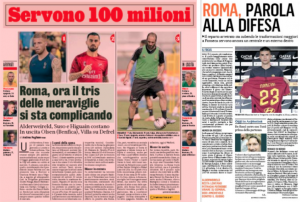 Watford are only mentioned in passing by Gazzetta dello Sport, explaining Javi Gracia’s side have been joined by Dean Smith’s, who could also face competition from Cagliari.

However, it’s all about Aston Villa in Il Messaggero, with the Hornets left out entirely.

No fee is mentioned, and there’s little detail, so we wouldn’t classify this as anything too exciting just yet, but it’s certainly something that could grow in the coming days and a transfer we reckon would be quite easy to complete.

We’ll keep an eye on it.