Home Europe Everton and Watford listed among ‘suitors’ for Serie A player – 11...
SHARE

Every transfer window for the past couple of years, we have expected Watford, at some point, to be linked with Grégoire Defrel, and so far, we haven’t been disappointed.

Sent on loan at Sampdoria this season, we thought this might be the one where the Italian media change their tune, but no.

Corriere dello Sport’s Rome edition are the guilty party, looking at potential exits from AS Roma this summer, with Defrel right in the middle of it all, as are the Hornets and Everton.

According to the newspaper, the French forward has ‘suitors’ in both Italy and the Premier League, with both Watford and the Toffees name dropped as potential landing spots for the 27-year-old. 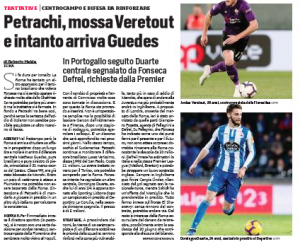 Scoring 11 goals in 36 appearances for Sampdoria this season, Defrel showcased his ability in front of goal once more, and it’s no secret Everton could do with someone capable of finding the back of the net who isn’t called Richarlison or Gylfi Sigurdsson.

Dominic Calvert-Lewin tried his best, but six goals in 35 appearances isn’t exactly an ideal return, even if he started just half of those games.

As for Watford, neither Troy Deeney nor Andre Gray reached double figures in the league this season and Javi Gracia could perhaps be looking to move on from one of them (probably the latter of the two) if he can.

That would explain this alleged interest in Defrel.

However, since we’ve seen this story disappear as easily as it appears in the past, we will suggest not getting your hopes up (if that’s how you feel about the Roma striker) just yet.

‘The time has come’ – Player needs to decide over West...