Long linked with a move to the Premier League, Amadou Diawara might finally get his transfer this summer, and it might be a bargain for whoever snaps him up.

According to Il Mattino, the 21-year-old, who only featured in 19 games this season under Carlo Ancelotti, will be allowed to leave Napoli if the right offer comes along.

Both Arsenal and Tottenham are labelled as ‘interested’ in the defensive midfielder, whose physicality on the pitch is ‘important’ for England’s top tier, thus making him a good signing for the north London duo.

On top of being available, there’s more good news regarding Diawara for Spurs and the Gunners, as Napoli have dropped their demands down to around €20m. 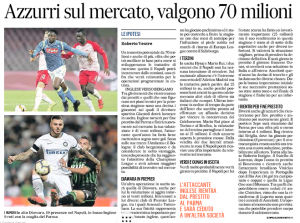 Contracted at the club until 2021, the Guinea international will be looking to rekindle his career elsewhere, having failed to fully convince Ancelotti in Naples this season.

Diawara’s season ended a couple of months early, missing the last 10 league fixtures through a muscle injury, but it doesn’t appear said physical problem will impact a transfer going forward.

While Arsenal know they will navigate the summer transfer window with Unai Emery as manager, Tottenham could find themselves without Mauricio Pochettino should they win the Champions League on Saturday.

If the Argentine does pull off the achievement and decides he has done all he can at the club, Spurs’ interest in Diawara could wane.

One we will definitely be keeping an eye on.