Home Premier League Arsenal Arsenal have ‘tested the waters’ with club and agent for striker –...
SHARE

It’s really hard to figure out where the whole Alvaro Morata to Arsenal situation stands, because there are a number of mixed reports on the matter.

The general consensus is that the Gunners want the Spanish striker in some shape or form, and would be prepared to offer more than Juventus, who are seeking to renegotiate terms with Atlético Madrid when it comes to the option to buy in his loan.

However, on Wednesday, it was stated that Morata, per La Stampa, had given Arsenal a ‘sharp no’ regarding a return to London, due to the fact his last stint there, with Chelsea, didn’t go well. 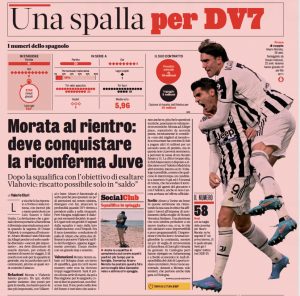 That being said, Gazzetta dello Sport do believe there could still be a chance, or at least that it’s not that definitive.

It’s pointed out that ‘a candidate to enter’ the fray is already there, and it’s ‘Arteta’s Arsenal’, who have ‘tested the waters with the player’s agent and with Atlético Madrid, even if an official offer has not yet arrived’.

The impression that Morata himself is giving off is that if he had to choose between a stay in Turin or a return to London, ‘he would choose continuity’.

Therefore, it would take a lot of convincing from Arteta’s end to get Morata to Arsenal, although Gazzetta dello Sport don’t seem to think it’s as definitive as what has been previously reported.