Back in November, a story appeared claiming Arsenal, alongside a number of other clubs, had travelled to Italy to watch Atalanta’s Gianluca Mancini.

The 22-year-old, who plays at centre-back, has been impressing this season in his first campaign as a regular starter, both defending well and proving a threat down the other end of the pitch, scoring four goals in 14 league appearances so far.

On Monday, Corriere dello Sport dedicate a section to Mancini, who happens to be one of the players Roma are looking at should someone trigger Kostas Manolas’ release clause next summer, and Arsenal are once again mentioned.

Struggling defensively, the Gunners have been linked with a number of centre-backs in recent weeks, yet they aren’t the only ones circling around the youngster. 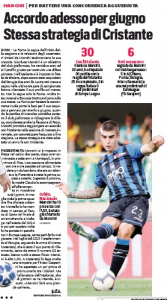 As well as Roma and Arsenal, Inter and Borussia Dortmund are big fans of what Mancini has to offer, meaning we could end up with an interesting battle on our hands.

It could all come down to whether the defender feels he’s ready for an adventure abroad or if he feels staying in Italy, perhaps at a bigger club, would be more beneficial for his development in the coming years.

Since he’s young, that big move to the Premier League can always wait a couple more years.