Earlier today we covered claims from Marca’s Argentina outlet of Everton interest in Wilmar Barrios, and made clear the Boca Juniors player has repeatedly been linked with a move to the Premier League, with an agreed deal reported more than once, without anything coming of it.

In their Monday edition, the Argentine newspaper states Everton are ‘willing to pay a fortune’ for the player and Boca manager Gustavo Alfaro already has a ‘possible replacement’ in mind.

‘Club sources’ at Boca are said to be the ones filtering this information, and they claim Everton will ‘return to the charge this week’ and renew an effort to sign Barrios after an attempt in the summer. 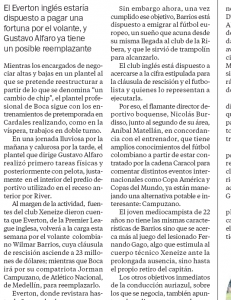 Back then Barrios rejected a move to Europe because he wanted to play the rest of the Copa Libertadores. He managed to get to the final and was sent off just as extra time started, then seeing his Boca team lose to rivals River Plate.

Now he’s ready for a ‘dream’ move to the continent. Maybe Boca are ready for the transfer too, given how the story is being pushed.

When Juan Foyth moved from Argentina to Tottenham in August 2017, El Dia were spot on with their reporting, so it’s worth taking some notice.