With Gianluigi Donnarumma officially announced as leaving Milan and Mike Maignan brought in to replace him, a goalkeeper merry go round could kick off this summer.

It appears the favourites to sign the Italy international are Juventus, which would therefore mean them needing to get rid of Wojciech Szczesny.

Turning into a good goalkeeper over the past years in Italy, the former Arsenal man would have some suitors, and it appears a return to the Emirates could be one of the options, according to Gazzetta dello Sport.

The newspaper look at what would happen should Donnarumma come in, and while Max Allegri, who will be taking over from Andrea Pirlo, ‘trusts Szczesny, referred here by his nickname ‘Tek’, an exit would ‘very much depend on offers’.

That’s where Arsenal, who currently have Bernd Leno as their starting goalkeeper, are labeled as ‘credible candidates’.

Whether this is something the Gunners and Mikel Arteta would truthfully entertain remains to be seen, but it appears Gazzetta feel there is some interest there. 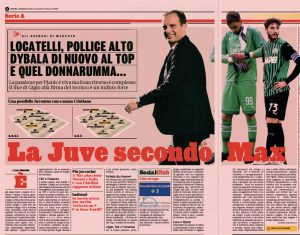 After all, the Poland international does count as home grown and would bring added competition for the role if Arsenal decide to keep two first-team goalkeepers.

However, that seems unlikely, and if Szczesny were to really come back, you would expect Leno to depart.