Shkodran Mustafi only joined Arsenal in the summer 2016 transfer window, but already by 2017 there were transfer rumours appearing. A return to Italy, where the defender had played for Sampdoria, was presented as an option, and it seemed Arsenal were at least willing to listen to offers.

But Mustafi stuck around and leading into the 2018 summer window there’s not a great deal of reporting around the player’s future.

Granting an interview to SportBild this week, Mustafi was repeatedly set up by the German magazine to suggest a move to the Bundesliga could be on.

Asked why he’s never actually played in Germany, the 26 year old explained: “It never happened. At the age of 17, I went to Everton because I always wanted to play in the Premier League. After the three years, I first disappeared from the radar. I never felt that the Bundesliga wanted me.”

Then asked if it’s true he received Bundesliga offers after the World Cup, Mustafi answered: “Yes, one or two clubs were spoken with.”

But German clubs moved too slow, and in the end Valencia came in and got a deal done. 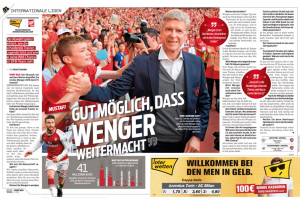 SportBild wanted to press some more, and asked Mustafi if he wants to return to the country to play: “Generally the Bundesliga is already a theme, because that’s my home.”

Considering how much the magazine pressed, it’s hardly a come-and-get-me-plea from the Arsenal player.