For a while, it appeared that one of Tottenham or Arsenal could end up signing Joaquin Correa from Lazio, as the Argentina international asked to leave Lazio.

Unable to fully fit in Maurizio Sarri’s plans and wanting a new adventure abroad, the forward made it clear he’d prefer a transfer away from the Serie A side, who were hoping to get €30m from any sale.

Unfortunately for Claudio Lotito and Igli Tare, no club has come close to that, and Corriere dello Sport explain the situation as it stands.

While Paris Saint-Germain were interested at one point, their ‘advances have died down’ now, perhaps having moved onto other targets. 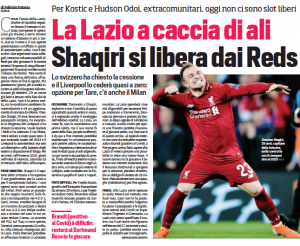 Arsenal, on the other hand, reportedly made an official move for the player, and ‘had offered €20m’ for the Argentine, described as a ‘figure considered inadequate by Lazio’.

This suggests the Gunners and Mikel Arteta didn’t have Correa as a top target, but there’s no harm in testing the waters to see if a move to the Emirates could be done on the cheap.

As for who wants him now, Everton and Leicester ‘could appear from the Premier League’, but it’s not entirely clear from this report whether the Toffees or the Foxes are ready to make a move, unlike what Il Messaggero were saying on Tuesday.