Tuttosport have gone off on an Arsenal tangent in their Sunday edition, with an outlandish suggestion of a double deal for a manager and a striker.

According to the Italian newspaper, Mikel Arteta’s situation is far from being secure, and therefore the manager could be shown the door at the Gunners. They then bring forward a possible swoop for Antonio Conte, who is out of work having walked out on Inter Milan earlier this year.

The idea would be that Arsenal appoint Conte, he then asks for Lautaro Martinez, and the Argentine striker falls at his former manager’s feet.

Stranger things have happened in football, yet Conte gave up managing Inter because he was concerned the club wouldn’t be able to challenge for the biggest trophies going forward. That’s arguably a similar case at Arsenal and the cloud over the London club grew darker on Friday as Arteta’s side lost to newly promoted Brentford. 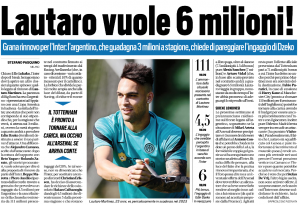 On top of that, there’s insistence from most of the Italian media that Inter don’t want to sell Martinez, having parted ways with Romelu Lukaku. The player’s agent has also dismissed the chance of a move.