Catalan newspaper Mundo Deportivo brings quite an interesting article today about a player of interest to both Manchester United and Manchester City.

As they write about Espanyol’s plans for the winter market, they claim no purchases will be made if the club doesn’t have any big sales in the transfer window.

And there’s only one player who could make such impact in their bank account, which is the 20-year-old left-back Aaron Martin.

Aaron has been linked to Manchester City in the summer, and now Mundo Deportivo claims that Manchester United are another club who could take him in January. Jose Mourinho’s side have been tentatively linked previously, and the idea of a Manchester battle seems to have stuck… it makes for good drama. 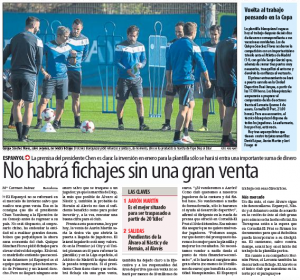 Espanyol’s board recently claimed there’s no intention to sell the player, partly because he’s from the club’s academy. But the newspaper says that a good bid would end up convincing them to do so, especially for a reasonable price, which would be of above €20m.

Manchester City had already signed Benjamin Mendy when Aaron started being speculated, so Guardiola probably wanted to have both players in the squad. That would make even more sense now, with the Frenchman missing the rest of the season due to injury.

On Manchester United’s side, you can never rule out the club moving for a left-back, but the recent decent games from Ashley Young and Luke Shaw may end up showing that the position isn’t José Mourinho’s priority to improve in the January market.