Home Championship Antenucci reveals influence of Leeds United fans on his beard, and one...
SHARE

At 34 years of age, Mirco Antenucci, once of Leeds United fame, is closer to the end of his career than he is to the start of it, but it’s OK, because he has a cracking beard.

The striker, who currently plays for SPAL in Serie A, is still playing regularly, and occasionally finding the back of the net, having done so three times in 12 appearances so far this season.

However, this isn’t about the football, it’s about his beard, as that’s what Gazzetta dello Sport wanted to know about, starting off with what would be the one achievement that would make him cut it off (winning the Italian cup, FYI).

The veteran goalscorer was then asked when he started growing it.

He said: “At Leeds. I personally liked it, and since the fans coined the slogan “Fear the Beard” with a t-shirt. Well, I kept it.” 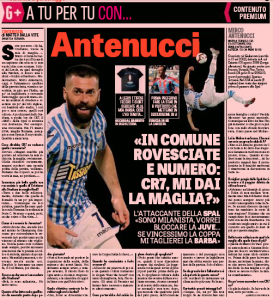 The former Leeds man was then asked, moving on from the beard, about what he would bring from English football to the Italian dressing rooms.

He explained: “The lightness with which the pre and after game is lived. Before the game, the dressing room is filled with music that’s played really loudly. There’s sweets in the middle of the room. Normal faces, not tense.”

Antenucci also revealed he would bring Freddie Mercury (“a musical genius”) with him into the dressing room.

Annoyingly, they didn’t ask him if he’d seen Bohemian Rhapsody at the cinema yet.