The English media starting a claim about Arsenal and Pablo Fornals has sent their Spanish counterparts off on several tangents.

Whilst The Sun had claimed Fornals has a release clause of €20m, today’s edition of Sport reported the clause is actually €40m.

They also added that Villarreal have no intention of selling and the player doesn’t want to go anywhere in the January window.

To further push home the point it was stated that should Fornals choose to leave his current employer then he’d move to another La Liga club, rather than chancing his luck in the Premier League.

Marca have it differently, with the Spanish newspaper saying the clause is ‘around €30m’ and that Villarreal are doing all they can to get a renewal and increase that amount. 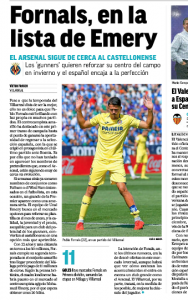 Whilst it’s explained Fornals’ intention had been to ignore any offers during the winter window, Marca suggest he could wobble if a ‘big club like Arsenal comes on the scene’.

Right now there doesn’t seem to be an awful lot behind this and Fornals joins the growing list of midfielders being linked due to the likely departure of Aaron Ramsey.