Alexis Sanchez training hard is nothing new. Arsenal having fitness worries about Alexis Sanchez whilst he’s away with Chile is nothing new. Now the two have combined themselves and with Arsenal fretting over Sanchez’s ankle, the player himself is going ‘full throttle’ in Chile training, report La Tercera.

At the weekend Arsene Wenger said Sanchez’s ankle was in a ‘terrible state’ after the West Brom match, but did point out that if there was no ligament damage he should be able to play for Chile during the current international break.

La Tercera explain that long after Chile training had ended for the day on Monday, Sanchez continued on the pitch, giving it his all. His teammates were walking around the national camp in their own clothes, enjoying some hours off, but La Tercera ‘Alexis Sanchez does not 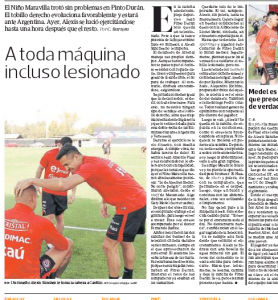 care’ and works to his own routine.

There’s no fitness worry over the Arsenal player as far as Chile are concerned, and he’s seemed in top condition and very happy to be training as much as an hour after everyone has stopped.

Unless Sanchez is bionic, which is a distinct possibility, there doesn’t appear to be any ligament damage for Arsenal to worry about.