The Italian media isn’t sounding very confident that Hakan Calhanoglu could find a new deal to stay at AC Milan for longer.

Following the rumours from this week claiming that the player’s agent has been in talks with Manchester United, newspaper Tuttosport brings their take on it today.

They write that the rumours regarding the Red Devils are ‘true’, as there are contacts between the Premier League side and the midfielder’s representative Gordon Stiplc.

What makes it difficult for Calhanoglu to stay at Milan, or even to move to Italian rivals Juventus, is his salary demands. Tuttosport claims he’s asking for €7m per season, a figure likely to be after tax. 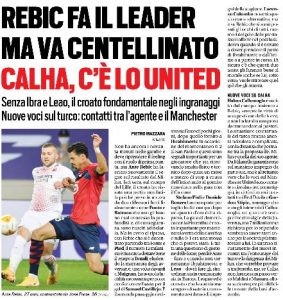 Talks for his stay at Milan shall continue, as the club would love to keep him, but unless the player shows some real desire to stay with the Rossoneri and lowers his demands, then it wouldn’t be possible to agree on a new deal.

Calhanoglu’s contract with the club expires at the end of the season, and that’s why there’s such a tense mood regarding his current situation. With even Juventus being ruled out by the local media, that would provide a clearer route for Manchester United.

However, how real interest from Old Trafford is, and how much of it is agent talk to pressure Milan, isn’t clear.