West Ham United should probably already start thinking of what to do with Felipe Anderson in the next transfer window.

Currently on loan at Porto until the end of the season, the midfielder has failed to impress and should soon be back in London, according to Portuguese newspaper Record.

The outlet writes that the 27-year-old has been a ‘true disappointment’ during his season with the Dragons.

They recall he nearly became a ‘reinforcement’ as he seemed to improve in the middle of the season, but soon ‘that expectation faded’. 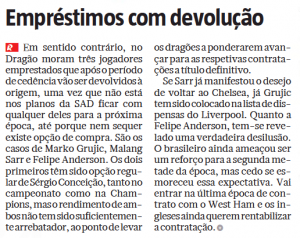 Record recalls that Felipe Anderson is now entering the final year of his contract with West Ham, and points out that the Hammers will still try to make money from him.

The newspaper says even though he’s regularly used by Porto, his form hasn’t been good enough to convince the Dragons to make a bid for him. So West Ham should soon start moving looking for some new options for the midfielder’s future.

The Brazilian is currently valued by Transfermarkt at €15m.