Genk signed Eboue Kouassi on loan from Celtic in the winter market.

Het Belang van Limburg now explains the Jupiler Pro League side were one of the clubs interested in the midfielder before he joined Hoops from Russian side Krasnodar in 2017.

Brendan Rodgers was manager at Celtic Park when the Bhoys took the Ivory Coast player.

He suffered a serious injury in the Scottish League Cup tie against Hearts in October 2018. On his road to recovery, Rodgers left Celtic for Leicester City in March 2019 and the Northern Irishman was replaced by Neil Lennon.

HBVL adds Lennon’s arrival signified the ‘beginning of the end’ for Kouassi with the Scottish Premiership champions and his appearance against Hearts could be his last match for Celtic. 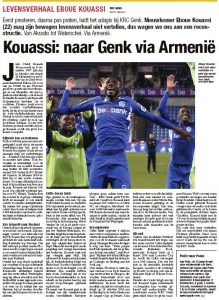 Genk sporting director Dimitri de Condé received information in January that the player could be taken on loan, on interesting terms with a purchase option.

He could be viewed as a replacement for Sander Berge, who moved to Sheffield United in the winter market.

The Belgian newspaper states Kouassi now feels like a footballer again and he will have few months to prove his worth at Genk.