On August 31st, both Marca and AS reported James Rodríguez’s move to Everton is ‘very advanced’ and the deal could be concluded in the coming days.

Later that day, A Bola explained the attacking midfielder was in Portugal and didn’t train with Real Madrid on Monday.

A Bola’s report has been backed up by Mundo Deportivo, and they further state the La Liga winners gave the 29-year-old permission to skip yesterday’s training session.

This was done because his move to Goodison Park is ‘about to crystallise’, and the newspaper adds the transfer could be made official in the ‘next few hours’.

‘In the absence of the official confirmation’, Mundo state the Colombia international will ‘definitely’ leave Real Madrid for the Toffees, and the Merseyside club will pay a fee of €25m to acquire his services. 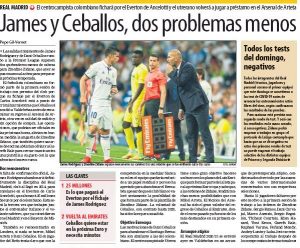 The South American’s arrival at Everton will see him work with Carlo Ancelotti for the third time in this career, after the pair previously met at the Santiago Bernabéu and Bayern Munich.

According to Mundo, the imminent departure of Rodríguez to Everton and Dani Ceballos’ loan move to Arsenal reduces Zinedine Zidane’s ‘problems’ at Real Madrid.