Liverpool are increasingly being seen as a real rival to Real Madrid for Kylian Mbappé.

On January 19th, we covered claims made by Sport that explained the Reds are ‘willing to compete financially’ with the La Liga winners for the Paris Saint-Germain star.

Real Madrid’s plan to sign Mbappé saw them not making any signings last summer as the club knows they will need about €150m to take him away from PSG. Los Blancos will also have to pay a hefty salary to the forward.

Sport explain the ‘great dream of Florentino Pérez can soon turn into a nightmare’ due to the economic crisis caused by Covid-19 and the France international wanting to sort out his future before the summer. The attacker’s current deal runs down in 2022.

PSG are also impacted by the pandemic as they have a ‘deficit of about €204m’. Hence, the Ligue 1 side will have to raise funds to balance their books and selling the 22-year-old can help them achieve it.

Mauricio Pochettino’s side are aware they will ‘have no problem in finding a buyer’ for the World Cup winner because the Merseyside club, along with Real Madrid, are interested in the player.

It’s claimed Liverpool will ‘compete and raise the bid’ for Mbappé. The Premier League winners’ interest is driven by Jürgen Klopp, who follows the star ‘closely’ and maintains regular contact with the PSG man and his surroundings. 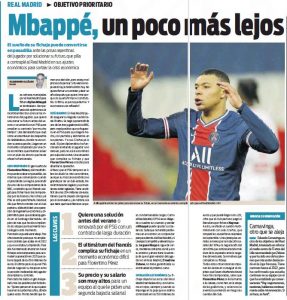 In addition to this, the Anfield side have an ‘advantage’ because Mbappé’s great supporter at Real Madrid, Zinedine Zidane, is ‘not guaranteed to continue next season’.

Real Madrid’s poor financial situation, Zidane’s uncertain long-term future and the attacker wanting to sort his out future in the coming months could make it hard for the Spanish club to sign Mbappé in the summer.

This could provide Liverpool with an edge to acquire the PSG star’s services, although where they’d get the money from isn’t even mentioned.