Earlier this month, we covered multiple reports coming out of France and Spain explaining that Liverpool will rival Real Madrid for Kylian Mbappé’s signing.

The forward has a contract with Paris Saint-Germain until 2022 and they remain hopeful new manager Mauricio Pochettino will be able to convince the player to sign a new deal.

Eden Hazard has struggled since he joined Los Blancos from Chelsea in 2019. Reports in the English press have stated the Belgian could be sold and the Madrid club could use those funds to sign Mbappé.

These claims are relayed in today’s edition of Sport and they add Hazard has time until the end of this season to change the opinion of the La Liga winners.

Liverpool’s interest in the France international is also mentioned in the newspaper as the Reds are a ‘strong opponent’ to Zinedine Zidane’s side in the race for the PSG star.

It’s claimed Jürguen Klopp ‘bets heavily’ on the World Cup winner to ‘strengthen and refresh’ his squad at Anfield. 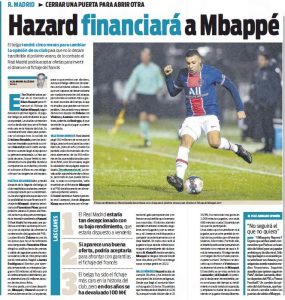 In addition to this, the German coach maintains regular contact with Mbappé and his environment.

Sport adds Liverpool are ‘willing to compete financially’ with Real Madrid for the former AS Monaco star.

In any case, the final decision rests with the player himself.