With a contract at Bayern Munich expiring at the end of this season, several top European clubs are interested in signing David Alaba on a free transfer.

A week ago, SportBild explained the defender’s father, George, and his agent, Pini Zahavi, are handling interest from top six clubs, including from Manchester United.

Today’s edition of Marca explains Real Madrid have reached an agreement for the 28-year-old’s arrival as a free agent in the summer.

It’s claimed the Austria international has completed his medical in the presence of a Real Madrid doctor and will become Los Blancos’ first signing for next season. He has also agreed a four-year contract worth €11m per season.

Sky Deutschland transfer expert Max Bielefeld has looked at the claims made by Marca on Twitter.

Sky sources: There is NO decision about the future of David Alaba yet. Real Madrid made a big offer, but there is nothing agreed. Talks with the biggest clubs in Europe (Real, Barcelona, PSG, City, United ) ongoing. The final decision will be taken in spring #TransferUpdate 1/3 pic.twitter.com/HFDzJJ5dHF

He claims the La Liga winners have made a ‘big offer’, but there has been ‘no decision about the future’ of the player yet.

According to the journalist, ‘talks are ongoing’ with other clubs, including Manchester United and a final decision on Alaba’s future will be taken in the spring.

Zahavi wants to wait until Barcelona’s presidential elections are concluded. Should his ‘friend’ Joan Laporta be elected, the representative wants to start ‘serious talks’ about taking his client to the Camp Nou.

Bielefeld also confirmed Alaba underwent a medical, but stated this was ‘paid for and organised’ by his agent, who did it for ‘private insurance’. There was no Real Madrid doctor present during this medical tests. 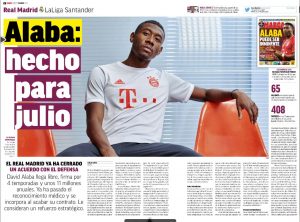 He further adds a final decision on where the Austrian will play next season will not be taken  ‘until April/May’.

The latest claims made by Bielefeld give United and suitors outside Spain some hope of landing Alaba on a free transfer in the summer.