Liverpool’s interest in Paris Saint-Germain’s Kylian Mbappé has been widely covered in Spain this month.

Sport were the last to cover the situation on January 19th and their report explained the Reds are ‘willing to compete financially’ with Real Madrid for the forward.

It was also stated Jürgen Klopp is in regular contract with the 22-year-old and his camp, and the manager is leading the Merseyside club’s interest in the player.

With a contract expiring in 2022, Mbappé has admitted he is “thinking very hard” over signing an extension with the Ligue 1 winners.

Mundo Deportivo on Tuesday state PSG have accelerated their efforts to tie down the France international to a new contract, but the latter isn’t in a hurry to sign a new deal.

Real Madrid are ‘studying different formulas’ to sign the World Cup winner since PSG are going to ask for around €160m to let him leave. His €21m net per season salary should also be take into account.

For now, the La Liga winners ‘cannot afford’ these figures since they have invested in remodelling their stadium. In addition to this, their finances are impacted by the coronavirus crisis.

One formula to sign Mbappé is by offering Vinícius Júnior as part of the deal since the French club have long been asking about the Brazilian.

Another hope is the PSG star decide against signing a new contract at Parc des Princes and arriving in Madrid as a free agent in 2022. 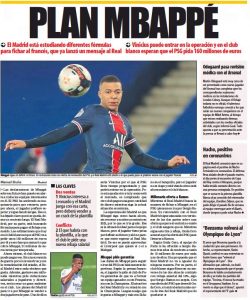 This isn’t an ideal situation for Zinedine Zidane’s side because Mbappé is in ‘hurry to define his future’.

Mundo explain Liverpool ‘can take advantage’ of Real Madrid’s financial situation since they are keen on signing the former AS Monaco man.

There’s no mention over how the English champions can finance the operation.