Home Europe ‘Above all Everton’ – Toffees said to have made transfer approach for...
SHARE

Everton made an approach for RB Leipzig midfielder Emil Forsberg before he signed a new contract this week.

That’s according to Kicker, who today say they went one step further than showing an interest in the player this summer.

Yesterday we covered a story from Kicker regarding Forsberg’s new deal at the club, which is set to run until 2025 and take him to a decade with them.

Before signing that new deal, his contract had been set to expire next summer, and that sparked rumours about a potential move.

That report said that several clubs in Europe had shown an interest in a move, with Everton named among them.

Kicker take it one step further today, though, and say that Forsberg was ‘approached’ by Sevilla, Roma and ‘above all, Everton’. 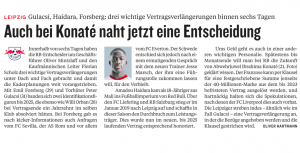 The nature of these approaches isn’t mentioned, but it’s clear that the Toffees were the keenest on making it happen.

The Swede, though, turned down these approaches and decided to stay where he is after encouraging talks with new RB Leipzig boss Jesse Marsch.

He’s promised the midfielder a ‘leadership role’ in his team moving forward, and it seems that was enough to convince him to stick with the Bundesliga outfit.