Sunday’s edition of L’Equipe reported that Michy Batshuayi is closing in on a loan move to AS Monaco, but that Everton and West Ham ‘don’t give up’.

In their Monday edition, the French newspaper have pushed the Hammers to one side but still insist there’s interest coming from Goodison Park and that a deal to Monaco isn’t quite as done as some are suggesting.

L’Equipe say that despite Sunday claims of a medical, rumours the player was lying to seal his transfer, and reports of an agreed deal between Monaco and Chelsea… none of that was actually true.

On Sunday evening, those in charge of transfers at the French principality club were confident a deal could be done, but passed on the information that nothing is finalised yet. 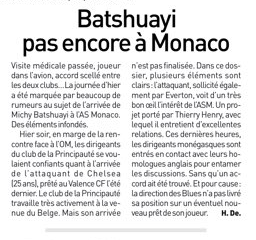 because Chelsea haven’t completely decided what they want to do with the Belgian international.

He’s had a tough time on loan at Valencia this season, scoring one goal in 522 minutes of La Liga football, and another goal in 346 minutes in the Champions League.

If Everton interest is genuine, they’ll need to work quickly to beat Monaco.