It’s been over two years since Brighton & Hove Albion took Percy Tau from South African side Mamelodi Sundowns and the forward hasn’t made an appearance for the Seagulls.

The 26-year-old spent the last two seasons out on loan in Belgian, at Union SG and Club Brugge, before joining Anderlecht on another temporary deal during the last window.

Graham Potter’s side were forced to allow the South Africa international go out on loan over the years because of his failure to obtain a work permit to play in England.

According to Het Nieuwsblad, a clause in the deal agreemed between Brighton and Vincent Kompany’s side will allow the English club to recall the player in January, which the Jupiler Pro League side will have to take into account.

Anderlecht wouldn’t have to worry about this ‘normally’, but Brexit ‘can benefit’ the Premier League side. It’s claimed Brexit will ‘relax new rules for recruiting’ non-European players. 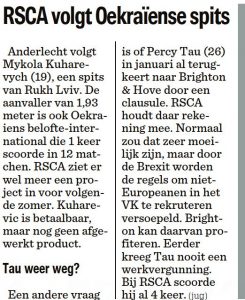 The newspaper’s claims have also been backed by La Dernière Heure, who state Anderlecht have to consider the departure of Tau in the winter market is ‘possible’ due to Brexit.

Anderlecht rely mostly on Yari Verschaeren and Michel Vlap, and therefore, according to DH, they would not ‘oppose’ Tau’s ‘premature return’ in January.

Tau, who is currently recovering from an injury, has four goals in 12 league appearances for Anderlecht this season.