Atlético Madrid midfielder Thomas Partey’s will not listen to any further offers for him until he has given his ‘final word’ to the club.

That’s according to Marca, who say the midfielder’s ‘priority’ is to stay at the club despite interest from the likes of Arsenal.

The Gunners have been heavily linked with a move for the Ghanaian for several months, with reports suggesting they were ready to pay his €50m release clause.

Partey’s father added fuel to that particular fire this week when he stated that Arsenal had already done so and his son was now negotiating how his release clause would be paid with Atlético.

That has been shot down several times by his agents, and now Marca have poured more cold water on Arsenal’s hopes.

According to them, Partey is keen to stay at the club and sign a new deal but has so far been ‘unsatisfied’ with the offers made by Diego Simeone’s side.

They are keen to extend his contract beyond 2023 in a deal that would improve his salary and put a more substantial release clause on him to deter interest from sides around Europe.

However, they are yet to meet Partey’s ‘expectations’, with the player aware that his stock is high and he could earn a big salary elsewhere. 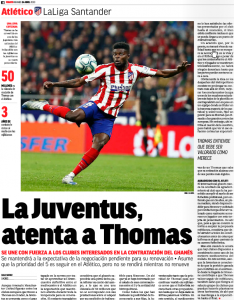 His ‘heart invites him’ to accept Atlético’s offer, but he is determined to ‘pay attention’ to all the details and ensure it is equal to his value before signing.

Unfortunately for those interested in him, he does not intend to talk about a move away until he has definitely decided he won’t sign an extension at the Wanda Metropolitano, something Arsenal and his other suitors are aware of.

That means that, if they are as keen as the rumours would suggest, they will have to wait to try and bring him to the Emirates.