Thomas Meunier will be a free agent in the summer if he fails to find an agreement with Paris Saint-Germain for a new contract.

On April 14th, we carried a report from L’Equipe, who explained Tottenham Hotspur ‘have the inside track’ for the Belgium international and Spurs are ‘very insistent’ in signing him.

Barcelona are ready to sanction Nélson Semedo’s sale in the upcoming window and their idea is to bring in another right-back for a lower fee.

Sport on Friday claims the La Liga winners are evaluating options but that no decision has been made yet when it comes to deciding Semedo’s potential successor.

It’s claimed the Catalan club have ‘already been offered top players’ and one of them is from Meunier.

The PSG fullback would be available on a free transfer and he would be open to the idea of making a switch to Camp Nou. 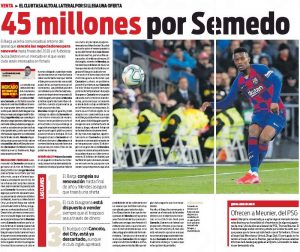 However, according to Sport, it seems Meunier has ‘almost everything done with Tottenham’.

Time should tell if Barcelona will look to convince Meunier to snub José Mourinho’s side and join them.